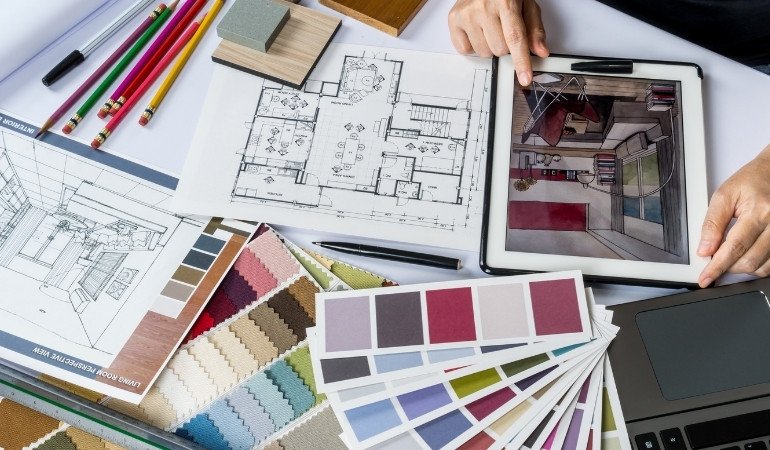 What is an Interior Designer?

First of all, you may be asking yourself – what is an interior designer? An interior designer is someone who works from the ground up, quite literally, to design a space that fuses functionality and design. They can work to design both residential and commercial properties, with the common denominator and goal being a captivating space.

While it’s not a requirement that interior designers pick one niche to serve, it may give you an advantage in your search for employment. For example, an interior designer specializing in the luxury sector may have an easier time breaking into the celebrity world and landing a celebrity client, especially with referrals and a strong network.

Though it may seem like an interior decorator and interior designer are the same thing, they aren’t. In all actuality, there are a few key differences between the two. When it comes to interior designers, they are often involved in the design process from the time a space is built to the end product. They work closely with the building team, including architects and construction builders, to make sure the property is built according to their vision.

If you’re curious about which is best for you, consider how involved you would like to be in the process. Does helping to polish blueprints and arranging the foundational layout of a building or room excite you? Or does arranging textures and colors to compliment each other speak to you more? Maybe both? An interior designer will see an idea through from before it’s been built, while an interior decorator will make the best of what they’re given – ask yourself, which is most appealing to you? (You can learn how to become an interior decorator.)

Do You Need A Degree To Be An Interior Designer?

Contrary to popular belief, you do not need a degree to become an interior designer, though it certainly won’t hurt. Obtaining a degree will help you develop a strong portfolio and a network to use upon graduation, but it is not necessary. If attending a college is not for you, there are many less-intensive methods to achieve an interior design education, such as a certificate or license, or even forgoing all education for more experience.

Perfect for replacing the traditional education route is an apprenticeship, wherever possible. Spending a bit of time to research local interior designers and reaching out to see if they will mentor you can make a world of difference in jump-starting your career.

Can You Become An Interior Designer With No Experience?

For example, if you wanted to be an interior designer and your parents owned a boutique design company, it would be much easier for you to have an “in” than someone who has no help at all. The best course of action to develop experience when you have no network would be finding a firm willing to mentor you or to go to school to earn a certification and build your portfolio.

How Much Do Interior Designers Make?

An interior designer’s salary, or how much they make, will depend on a few factors, including whether or not they have a formal education. Additional considerations include how many years they have been in the business and whether they’re working as a sole proprietor or as part of a team, which may take a percentage of their income.

According to ZipRecruiter, interior designers make an average of $51,197 per year nationally. The lowest income falls at roughly $19,000, while the highest is $79,500 on average. California tops the list of top 10 interior design salaries, with most being California cities. Many find the average salary to be lower than expected

How Long Does It Take To Become An Interior Designer?

A Certificate – A certification will take less than one year, sometimes as little as a few weeks to a month, depending on the pace of the course.

Two-Year Degree – An associate degree takes an average of two years to complete and offers a short educational overview of what it means to be an interior designer.

Four-Year Degree – Another option for education is a bachelor’s degree, which will take roughly four years to complete.

Some states require that you register in their government database before you are allowed to practice. For example, if you would like to be an interior designer for commercial spaces in the following states: Louisiana, Nevada, Florida, Washington D.C., or Puerto Rico, you must register beforehand.

Can I Be a Virtual Interior Designer?

Though there are education options out there for those interested, it’s not required as previously mentioned. Below is a breakdown of becoming an interior designer without an education. If you wish to go to school, most of these steps will still apply, though it will take longer to reach your end goal, but you may have a leg up in getting started.

In order to excel in a business, you’ll first need to know everything there is about it. Make sure you’ve taken the time to properly research what interior design is and make sure it is something that you want to do. Unlike interior decorating, interior designers are involved early on, oftentimes before a space has even been built.

They’re working closely with clients, architects, and construction workers, sometimes acting as the communication funnel between all parties. They will also be in contact with suppliers and manufacturers to make sure their vision, including custom pieces, are crafted to perfection. So before going any further, take time to really dive into the process and make sure this is something you could see yourself doing, but more so, something that will make you happy.

2. Research and Choose Your Niche

Rather than being familiar with all interior design best practices, you become an expert in one or two and model your experience/portfolio around it. You won’t need to stick to this niche forever, and it doesn’t mean you can’t expand, but it will be easier to jump in and make a name for yourself if there are one or two things you specialize in.

3. Register Your Name in Your State

Some states have registries for interior designers, as mentioned above. While no state requires you to add your name to the list to operate, there are a few benefits. The first being that it adds a layer of credibility to your name because you are considered an “official” interior designer.

4. Find a Mentor to Work with You

A mentor is a great way to gather experience without the stress of finding your own clients right away. In addition, working with a pre-established firm or company means that you will have direct guidance and ample opportunities to build your portfolio, garner references, and network.

Simply search for interior designers near you and contact a few asking whether or not they would be willing to mentor you, a novice interior designer. Some may require that you have had some sort of training, usually education, but not all. If you’re finding most ask what schooling you have, it may be a sign to move past the mentorship step and focus on other outlets. Instead, you may need to begin marketing yourself as an individual service or work toward a quick and efficient interior design license.

5. Get Your Name Out There

It’s mentioned often, and that’s because it’s so important – networking. In today’s world, networking is easier than ever, but that doesn’t mean that it is easy. Whether you decide to smear your campaign across social media to gain new followers and eyes, or you stick to loved ones, you’ll need to network. Getting your name out there and in front of people helps to establish a brand, which has immeasurable benefits, even if they are not overtly apparent upfront.

You may find that a friend from high school on Facebook has a cousin that they recommended your services to, and you’ve just landed one of your first clients! Posting on social media, reaching out to local businesses, and petitioning friends and family for your services are great ways to grow your network and present yourself as THE interior designer they need to work with.

Like networking, building your portfolio is essential and will be mentioned repeatedly as you launch an interior design business. Whether they are photographs of living spaces from real clients or they are mockups created with online design software, they’ll all count toward your portfolio.

Continue practicing often and without fear of failing, or you will never develop the new skills required to keep up with changing interior design trends. Remember to keep your portfolio updated with the best reflection of you in the present. As you continue to gain more experience, it will be impossible for you to stay the same. As your skills grow, your portfolio should grow with you. You might also get an interior design license to boost your portfolio and learn a new wave of skills.

7. Stay Up to Date on Trends

Even after you’ve broken into the interior design space, remember to stay on top of every changing trend. Even from the outside looking in, it’s easy to see that what’s “in” is constantly changing. From modern farmhouse to boho chic, it’s impossible to tell how often trends will change or where they will shift next, but it’s your job to always stay in the know. A client might not be happy with a designer who continues making decisions as they would in 2010 when the times and style have changed so much.

A great way to stay up to date is following interior designers in the same niche as you on social media. Also be sure to follow architectural blogs and newsletters as they are often among the first to present new trends. Sometimes before your very own colleagues or followers!

Staying ahead of the trends, or at least up to date with them will help you win over more clients, and you’ll establish yourself as someone who truly knows their stuff.

Are There Any Successful Interior Designers Who Were Self Taught?

If you’re still hesitant to dive into interior designing without a formal education, you’ll be happy to know there are many successful self-taught interior designers. While a degree may aid in the process of becoming one, it is not necessary.

For example, Ryan Korban is a young innovator who was never formally trained in interior design. Yet, he has gone on to be featured in major magazines like The Wall Street Journal, Harper’s Bazaar, and more. Despite getting an art history degree, his education did not guide his interior designing career, rather his experience.

Upon entering the interior design space, you will find it near impossible to not come upon Ryan Korban’s name. He is a great example to follow if you’re trying to make a name for yourself without a degree or certificate in interior design.

Another great example of a popular interior designer who took the experience route rather than the education one is Mr. Kate. Especially popular for today’s younger generation, Mr. Kate has made a huge splash in the interior design world, particularly on the online platform, YouTube. You may have seen her beautiful designs across the internet as she frequently works on fellow Youtubers and celebrity homes, documenting the entire experience for her online viewers.

Other big names to follow for inspiration include Vincente Wolf, Brian Patrick Flynn, and Max Humphrey. All of which will inspire you to continue pushing as they once started exactly where you were. These self-taught interior designers are evidence of what hard work and experience can get you!

Search For Schools And Courses By State

See Our Pick For The Top Real Estate School

Check out the one real estate school that has the Best Pass Rates, Interactive Training, 24/7 Access, Pass The Exam Guarantee and GREAT SAVINGS!